Volunteer blog: more than a garden 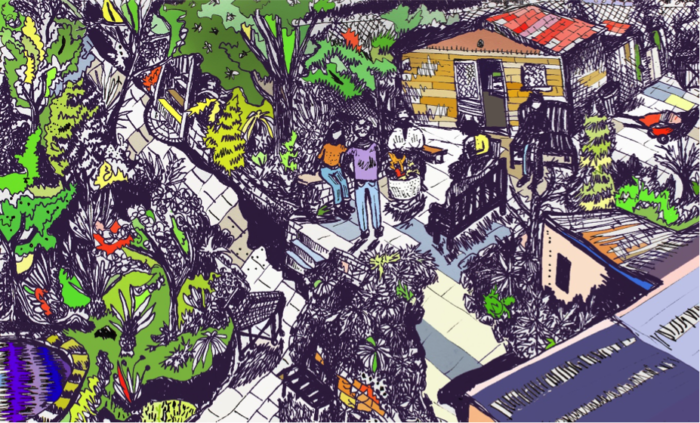 On Friday we laugh

During my time as a volunteer with Room to Heal (RTH), I learned that Fridays are very important. That’s the day when the community relocates to a beautiful garden in Islington to share a communal meal cooked by one of the members, who for the duration of the session, is referred to affectionately as ‘Chef’.

Everyone has a role to play in the preparation of the food. Those with good chopping skills cut up industrial quantities of garlic; others harvest vegetables from the RTH plot and some simply give the chef a big round of applause as the meal is plated up.

There’s always a good bit of debate going on about the best way to cook rice, or what quantity of green chilli is too much to use in a curry.

It’s a supportive atmosphere, and most importantly, a time when members, staff and volunteers can come together in a more light-hearted setting.

I loved being part of these Friday sessions, so in the fourth year of my Anthropology degree, I decided to use my dissertation to investigate the relationship between RTH and the garden, hoping that I could do justice to the complexity of the charity’s engagement with the garden.

The process was an interesting one as it encouraged me to reflect upon the significance of aspects of RTH’s therapeutic model that I had not previously considered. There’s only space in this blog for a brief tour of my findings, but I have also included some of the illustrations that accompanied my writing.

More than a garden

As I conducted my research, it became obvious to me that the garden becomes a therapeutic landscape for those at RTH, making it a hugely significant part of the charity’s overall therapeutic model.

Members of the charity gained significant therapeutic benefits from taking part in cooking and gardening here.

Interviewees told me that their experience of nature in the garden made it a restorative place in which to spend time. One described the garden as “a breathing space, a meeting space that grows”, another said:

“I guess they [the seasons] give you a sense of something beyond yourself, like when you’re in the garden, or the weather is impacting what you do, or you see the growth around you… you get a sense of something that’s beyond yourself…it kind of reminds us that at some level, whatever our troubles are, that there is something greater than that, you know….and the thing that is greater can actually hold us, and hold us in our troubles…”

The garden also has a strong place identity for the members, and has become tethered to both community and individual narratives, with parts of the garden reflecting the members’ lives. I learned that when RTH first came to this garden, some members built a winding pathway around the flowerbeds.  It was made circuitous for a reason – to represent the long and difficult journey they had undertaken so far in life. The Charity puts emphasis on life journey, and building a pathway was an important way for those first members to conceptualise their progress since coming to the sessions.

Members of RTH, who live within a wider frame of uncertainty because of their precarious immigration status can gain agency from being able to garden, grow and consume their own produce – all of which can be therapeutic.

Cultivating a garden can be seen as a way of caring for the RTH community. The cooking, consumption and incorporation of food by the members creates community and group cohesion.

In a context where members lack other opportunities for personal expression, gardening and cooking can provide a much-needed creative outlet. An important part of the ethos of RTH is to support members to rebuild their lives living in exile, so getting a member to cook for the group demonstrates that they still have agency and the ability to be creative, provide for others and be part of a community.

Food can also be a powerful reminder of past events, people and places. Time spent in the garden enables members to sustain culturally meaningful food practices which can allow them to maintain a sense of self in a new environment.

I felt that the garden is a therapeutic place to spend time because it gives members a sensory break from this hostile environment.

As one interviewee said, “it provides a space away from the noise and conflict of life”.

The light-heartedness of the garden sessions are very different to the more serious and traumatic encounters members have with the Home Office, and can be seen as another form of resistance to the Hostile Environment. In the garden, members have the potential to be more playful and cast their minds away from their trauma.

As one interviewee put it:

“On Tuesday in the support group, we cry. And on Friday, in the garden, we laugh”

It is RTH’s aim that members eventually ‘graduate’ from the community, meaning that they may not come to the garden anymore.

“I think it’s also like a milestone that people might want to move on from… if they’ve been coming every Friday…then it might be quite important, to actually no longer come to the garden, but to leave, because actually, they’ve got roots in another sense… they have a different kind of consistency in their lives.”

Those at RTH recognise that when a member feels ready to leave the therapeutic landscape, it is a positive outcome. The garden can be seen as a stepping stone for members to form their own environment which can sustain them in the future within the continuing Hostile Environment.

I am not currently living in the UK, so I have taken a break from volunteering in the garden. Even though I am far away, I can’t help thinking of those at RTH on a Friday. I wonder what is happening in the garden, who is cooking, what vegetables are ready to harvest and whether it’s cold enough in London to light the bonfire yet. It’s comforting to know that RTH and their laughter will always be in the garden on a Friday.