Room to Heal in Geneva Day 1 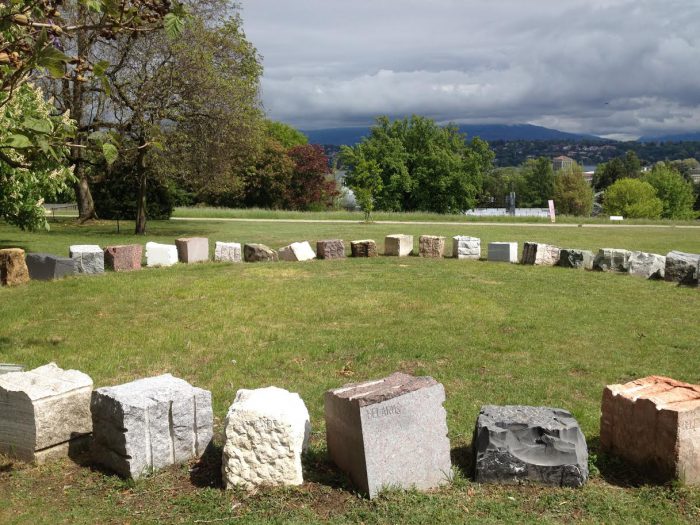 This year’s theme (torture in the context of migration) arises out of the urgency of the fact that more people than ever before in human history are on the move. And these journeys are becoming increasingly longer, more precarious and more multi-directional. Greater attention needs to be paid to the intersecting phenomena of torture and migration, not only in the country of origin, but at borders, in transit and in the destination country.

We heard from Kate Gilmore, the UN Deputy High Commissioner for Human Rights, who urged those present to form an “inviolable community of determination” and a “network of defence” to insist that no-one, on any grounds, be deprived of human rights – the universal text for human dignity. She called for “rigorous, evidence-based compassion” to be at the heart of our response to human crises. Her impassioned speech – extolling human rights in the face of undignified responses to migration and the great inequality between luxury movement and forced movement, that the International Community has little to be proud of – reminded all present to commit to making the event as urgent and useful as possible: not to expel, as she put it, too much “hot air which is what makes the ceilings of this UN building so high” (!) Indeed, the next few days were to prove stimulating, overwhelming, inspiring and simultaneously energising and exhausting.

The vital and inspirational words of Kolbassia Haoussou, Coordinator of Survivors Speak OUT, Freedom from Torture, UK was undeniably one of the most important parts of the whole three-day event. He reminded us of the ill-treatment of immigration detention, the asylum process which doesn’t allow you to forget, and which tries to take away your power and your voice. But they did not succeed: “Who is better to speak if not us? We are not just case studies or testimonies used by others – we are experts.” In an event entitled an ‘Expert Workshop’, it is vital to have present Experts by Experience.

The first panel, included a minute silence to honour the people who were not present, who have or have not survived torture, for their courage. A lawyer from India told us that up to one-third of the asylum seekers they see have been tortured. We heard from a doctor in Italy who estimated that 90% of medically-assisted migrants his agency sees have reported experiencing violence, including from within detention.

Hearing from committed human rights defenders reminded us of the huge scale of human suffering. A lawyer and researcher from Poland reminded us that national media networks have us believe that we are receiving a disproportionate number of migrants, yet when 65 million people are displaced over the world, and only 6% of these find themselves in Europe, with 90% hosted in the Global South, “facts lose out to post-truth and fear”.

The Q&A session provided animated debate, particularly on the topic of identification and documentation of torture; whether “as early as possible” really is that useful or not, and for whom is it useful: not always for survivors themselves. We also discussed redress and the prosecution of perpetrators (which is notoriously difficult as often people are tortured by faceless officials, police, prison guards, border guards, militia, etc.), some wondered whether the very concept of justice should be widened beyond prosecution. As our Director, Mark Fish, pointed out, in 10 years working with survivors of torture, no one he has known has sought reparations. He wondered whose agenda is at the fore when we talk about redress? Seeking prosecutions and reparations is not the only definition of justice.

However, the need for accountability was widely felt to be of prime importance. We heard about high levels of violence and sexual violence within refugee camps and reception centres, where authorities often turn a blind eye, and migrants who are keen to move on quickly, will not prioritise reporting incidences of violence and ill-treatment, often out of fear. Important points were made about how torture is being sanctioned by an increasing international indifference, partly because we are being overwhelmed and/or desensitized to it; and the post-9/11 “war on terror” certainly made things worse. We were also reminded of Trump’s recent words that torture “works”. This cannot be tolerated. The prohibition of torture is absolute. There is no space for blurriness, obfuscation or compromise. Torture does not become legitimate because it “works”. Slavery, genocide, terrorism all “work”. This is simply not an argument. Torture is unlawful and this is non-negotiable.

Pieter Ventevogel, from UNHCR, gave a fascinating presentation on the need for rehabilitative models that integrate comprehensive approaches, taking into account multiple losses. Using the already-present resources of the community strengthens mutual self-help between people. The topic of bottom-up approaches to rehabilitation was echoed by many present, and indeed is integral to the Room to Heal approach. Often medical and psychological assessment and diagnostic tools are categorical rather than dimensional. Often they are the only tools to hand, yet often Western, individualised labelling completely misses cultural and spiritual interpretations of suffering. Further, does it make sense to talk of “post” traumatic stress, when people are still being threatened?

The danger of medicalising and pathologising suffering is that people’s current, lived realities can be sidelined, and the political component ignored. This is why, at Room to Heal, we insist on combining therapeutic support with practical casework assistance, and we work to validate people’s traumatic experiences as normal reactions to abnormal circumstances, shifting the burden of culpability from the individual to the system that produced the violence in the first place. Sometimes a mental health diagnosis can inadvertently compound such feelings of shame and blame and can present as offering ‘treatment’ or ‘solutions’ whilst missing the politics, the bigger picture: 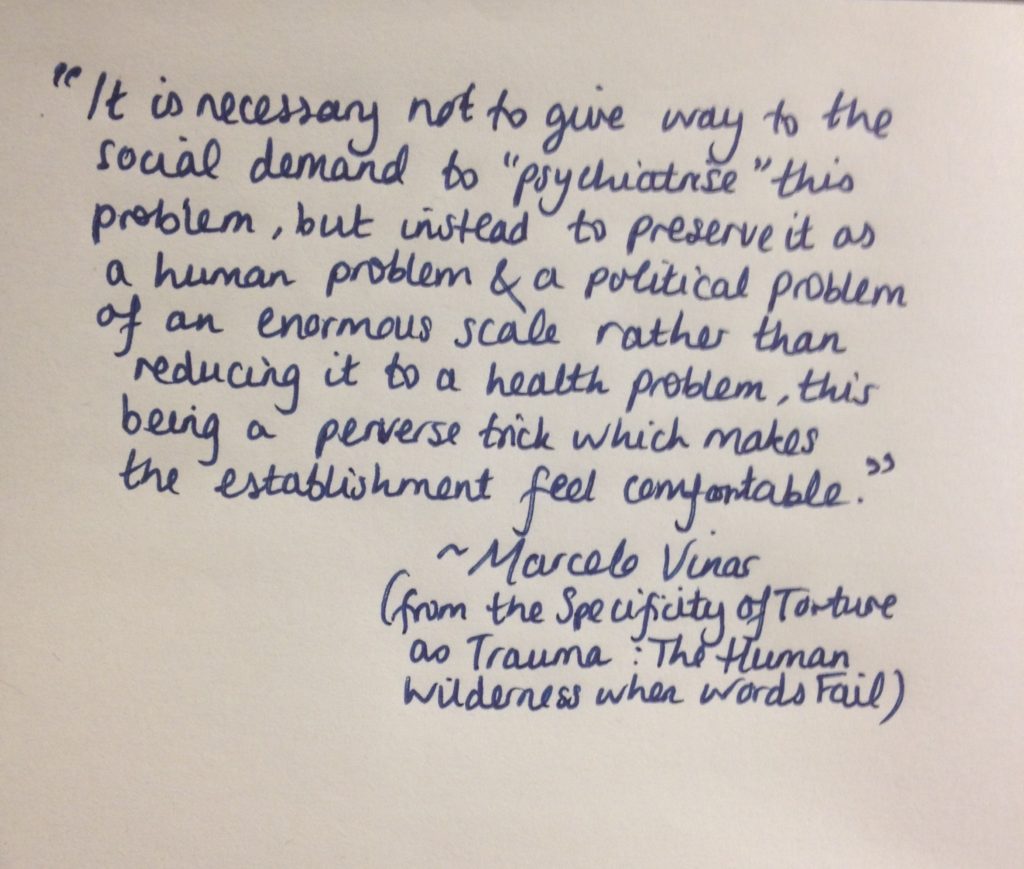 It felt hugely gratifying to have a platform to share these insights and to remind those present of the politics of it all – which all too often is ignored.