Room to Heal in Geneva Day 2 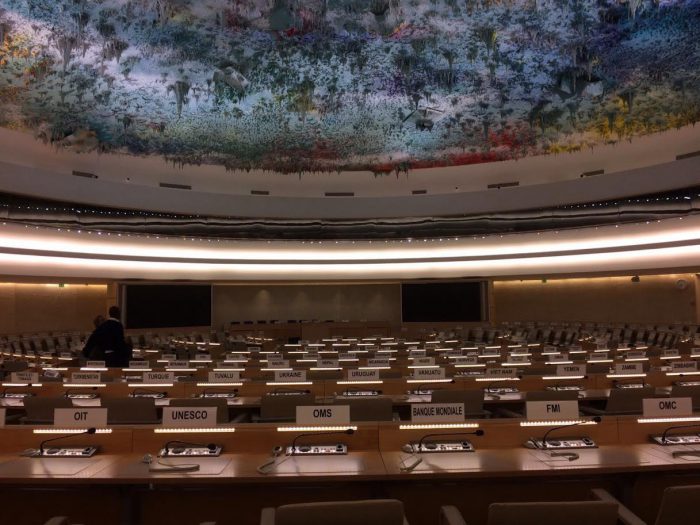 The morning’s panel included Room to Heal’s very own Mr. Fish. His speech was really well-received, a rich and nuanced depiction of Room to Heal’s history and unique, holistic and deeply human approach which is rooted in community, a culmination of 10 years of work. He spoke of the catastrophic impact of torture, not just as having psychological ramifications, but how it “shatters a person’s sense of self”, on an existential level.

It was such an amazing opportunity for our small organisation to have such a platform: people really listened, on several occasions during the ensuing discussions, participants referenced “how Room to Heal works”, the “Room to Heal community model” and continued discussing the pros and cons of medicalising distress, and reminding each other of the power of community and bottom-up approaches, how the western individual model doesn’t really go far enough.

During the Q&A and also in the break-out session with half the participants, we discussed at length how the Room to Heal “community approach” could be applied to situations of transit and refugee camps. It was exciting talking this through with people: how to foster environments of healing and mutual support and solidarity even if it is in short-term contexts (although it came up how often, it is assumed that the transit situation or refugee camp is for the short-term but that people will often end up staying, stuck, for much longer, even for years); how community resources exist wherever you are; how workers themselves in these contexts could definitely benefit from this form of social, community support, addressing vicarious trauma and burn out, and how this strengthens their own community, and as a consequence, their work.

As we have written elsewhere, it’s about facilitating environments where people can find their own solutions together, as people discover for themselves what they need best to heal. Further, the Room to Heal community model is a crucible for any other methodology or way of working: ultimately however you approach it, things make more sense to people from within a community. Community confers meaning. This idea was echoed by Bernice Carrick, from The Humanitarian Group in Australia, who said “people are more experts on their needs than we are.”

We learnt a huge amount from Chris Eades, from St Andrew’s Refugee Services in Egypt. Their organisation employs 90% of its staff from forcibly displaced communities, who are paid exactly the same as western workers, they don’t value refugees’ work any less.  They never turn anyone away based upon status. They provide a range of services, from psychosocial, material, educational and legal support to simply providing a safe space where people can sit and hang out without fear of racist harassment from locals and the police. Similar to Room to Heal, St Andrews regards group and social work as often being more relevant that one-to-one therapy.

Day 2 concluded with each participant stating what they had got out of the event, and what could perhaps be done differently next time. Izzy said that now more than ever we have to recognise that we are in this together, in a world in which right-wing populist and fascist movements are on the rise and there is increasing negative rhetoric around migration, it is so energising and inspiring learning from people from all corners of the world who are resisting. However, we have got such a long way to go to challenge power structures and racist, violent borders. And, as for suggestions for next time, more experts by experience. Chloe talked about the importance of connecting our work with others and recognising commonality, hoping that we will stay in touch and that the UN Fund for Victims of Torture will create a knowledge-sharing platform to enable this. She also spoke of the importance of rest. Mark said that coming to this event gave him a chance to lift his head above the parapet. He reiterated that we don’t know what people need to heal but what we can do is provide environments for healing where people can work it out for themselves.

Another brilliant thing about today was that members of the Committee Against Torture (CAT) were present and they are going to reflect on what everyone spoke about in order to inform their next General Comment.