Room to Heal in Geneva Day 3 “A Victim’s Journey: Redress and Rehabilitation for Torture Victims in Migration” 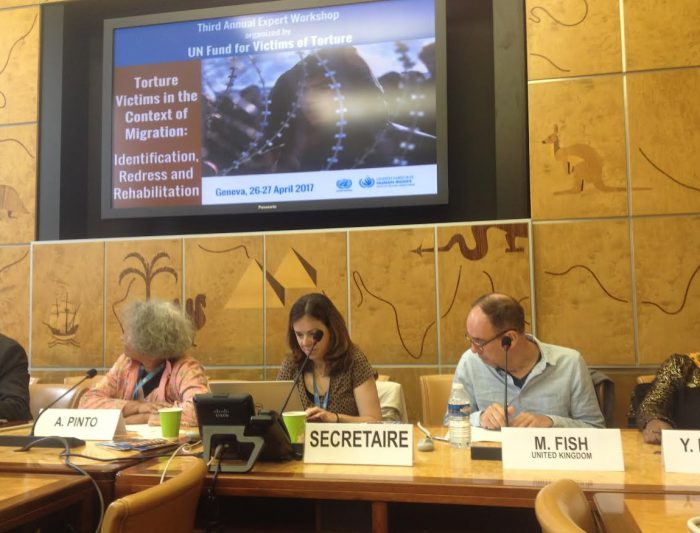 Public Event: “A Victim’s Journey: Redress and Rehabilitation for Torture Victims in Migration”

This event was attended by heads of state and dignitaries representing states who will voluntarily donate to the UNVFVT (this is what the V stands for – voluntary). So it was an opportunity for the Fund to showcase some of the projects they support and summarise some of the learning from the previous two days.

Kate Gilmore gave another stirring speech, reminding us that innovation and invention have come from migration: this exploration of difference and contrast is where we’ve shifted mindsets. You cannot “cherry-pick” in globalization. If data, capital, influence can move freely around the world, how can it not be okay – essential in fact – for people to move.

“People flee because they have no choice. And we should not accept a human life without choice. Whether you are on the move or not, we all have rights. There isn’t a no-go zone for rights. They are those things from which we cannot be removed.”

She also eloquently spoke of the toxic descent into intolerance and xenophobia when the foreigner is denigrated as an outsider. This dehumanizes us all.

“Rights are not a series of endorsements of awards. They are for the best of us and for the worst of us, to the exclusion of none of us and the benefit of all of us.”

We were so pleased and privileged that Mark had been chosen for this final panel. He spoke alongside the following:

You can hear his eight-minute speech below.

We are very grateful to the UN Fund for Victims of Torture, particularly Cecilia and Roanna who made everything smooth and organised for us and we hope that we will stay in touch with the friends we made, take home the learning we gathered and know that participants were moved and inspired by Room to Heal.